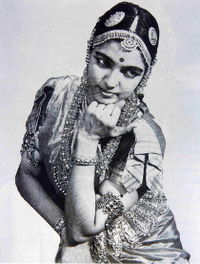 Bharatanatyam (“Bhava” means expression, “raga” – music, “thalam” – rhythm and “natyam” – dance) is the classical Indian dance form. Bharatanatyam based on treatise – Natya Sastra by Bharata – which dates back from 2 century BC to 2 century AD. Originally it was a ritual dance, which was performed in the temples across South India. But later it was revived and brought to the public by Rukmini Devi Arundale (founder of Kalakshetra Foundation).

Today, Bharatanatyam is one of the most popular and widely performed dance styles in India and is practiced by male and female dancers all over the world.

Degree and Post Graduate courses covering the practice and theory of Bharata Natyam as well as the languages associated with its development are available at major universities of India.

One of such institutions is Kalakshetra Foundation, which is actually the place of origin for this beautiful dance.

You can read more about Bharatanatyam on Wikipedia.